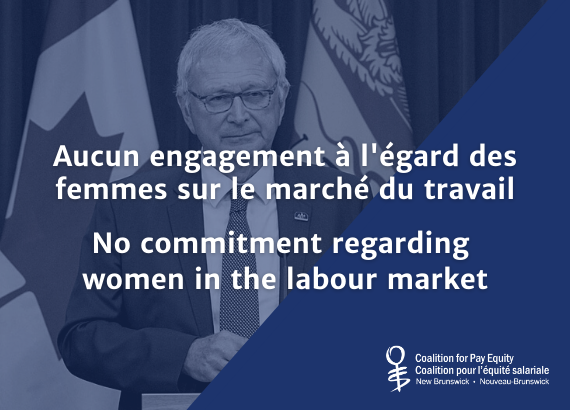 2020 NB Election: No commitment regarding women in the labour market from the Progressive Conservative Party and the People's Alliance

Moncton — The New Brunswick Coalition for Pay Equity decries the lack of commitment to pay equity in the platforms of the Progressive Conservative Party and the People's Alliance. These are the only two parties whose platforms do not promise pay equity legislation or investments in wages in the community caregiving sector.

"We are disappointed that the interests of working women are sidelined in the platforms of two provincial political parties. This is particularly glaring at a time when the pandemic has disproportionately impacted women and accentuated existing inequities," says Frances LeBlanc, Chair of the Coalition.

In its 2018 election platform, the Progressive Conservative Party committed to ensuring “the province has enough trained home-care professionals earning a wage upon which a career can be built”. According to the Coalition, investments in the sector over the past few years have not yet achieved this goal.

"Front-line workers such as care workers, who are predominantly women, deserve a significant and permanent wage increase in order to receive a fair wage. The under-valuing of these jobs has already led to significant challenges in recruiting and retaining qualified personnel in the care sector," says Frances LeBlanc.

The Higgs government has increased wages through annual budgetary investments for certain services, including early childhood educators. It is committed to following through on its promise to raise their wages to $19 per hour—a far cry from pay equity.

“A healthy economy and society must ensure that all its citizens are able to participate equally, and that their work is valued and paid fairly,” concluded Frances LeBlanc.

There is a media contact available on this news item: