Lowest paid workers in New Brunswick retirement homes being excluded from federal wage top-up
A wind of change at the Coalition: 2020 SGM and AGM
Statement of support for community care-giving sector employees 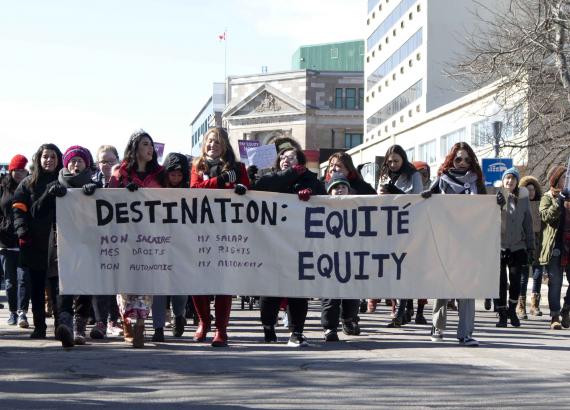 DESTINATION: PAY EQUITY We have marched but we have not reached our destination

Moncton, March 8, 2020 – More than 200 people marched in Downtown Moncton this afternoon, calling on the provincial government and all MLAs to quickly adopt legislation on pay equity for the New Brunswick private sector.

“All these people were there to say loud and clear to our current elected officials and to those who are thinking of running for office that it is high time this province showed its support for feminism and recognized that pay equity is the key to women’s equality. The days when women had to depend on men for their financial security are long gone,” stated New Brunswick Coalition for Pay Equity’s Chair, Frances LeBlanc.

“Thousands of women in the province are kept in poverty because the government does not prioritize investment in social infrastructure. Human rights are relegated to second place when decision-makers take such a stance.  Our movement is growing stronger and we will not give up,” warned RFNB’s president, Lyne Chantal Boudreau.

The fight for the equal treatment of women is being waged in other jurisdictions as well; in fact, the Alliance des femmes de la francophonie canadienne is working on this very issue. “It’s rather incredible that in 2020, governments are still refusing to pass laws forcing reluctant employers to treat female employees fairly. Women in New Brunswick and across the country are not fooled. It is sad to see that political parties refuse to embrace feminism and do not take concrete action. We will be there, alongside these activists, to bring our elected officials and candidates to heel,” said AFFC’s president, Lily Crist.

The three groups reiterated that jobs and financial security are among the top five issues women raised in the course of Resonate, a New Brunswick Women’s Council initiative. “It’s a key issue for women and we will see to it that it be resolved,” said Lyne Chantal Boudreau.