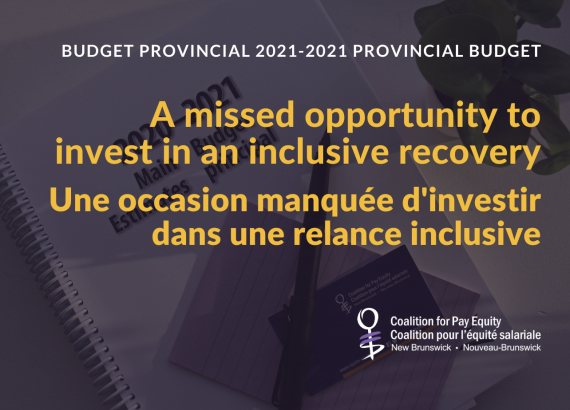 2021-2022 provincial budget: A missed opportunity to invest in an inclusive recovery

Moncton - The New Brunswick Coalition for Pay Equity commends the provincial government’s efforts to continue investments in key female-dominated sectors, but the 2021-2022 budget falls short in addressing the gender inequalities exposed by the pandemic.

“We are glad the budget recognizes the essential role caregivers and early childhood educators play in caring for the most vulnerable New Brunswickers, and how wages represent an important metric in recognizing the value of that work and improving the recruitment and retention of these workers. However, it falls short of a five-year plan to reach pay equity and bring stability to the sector,” said Johanne Perron, the Executive Director of the Coalition.

The budget included an hourly increase of $0.75 for the wages of trained early childhood educators, bringing their hourly wages to $19. The budget also allocates $12,4 million for hourly wage increases for workers in the community caregiving sector, but details will be released later.

Currently wages in the caregiving sector fluctuate between 14 and 16,80 $ an hour. The Coalition has shown that they would be between 22 and 25 $ an hour if they were on par with wages of male-dominated jobs of comparable value.

“The pandemic has revealed significant gaps in our social infrastructures that could have been addressed in this budget. The investment in wage increases is not enough to reach pay equity this year, nor is it enough to reach it in five years,” added Johanne Perron.

The government published a gender-impact assessment of the budget for the first time, responding to a long-standing request from NB women’s groups.

“We welcome this decision. This allows the government to look at the different impacts the budget may have on women and men. We are counting on the government to build on this experience to include information and consideration of gender, race, ethnicity, religion, age, and mental or physical disability in its next budgets”, says Perron. 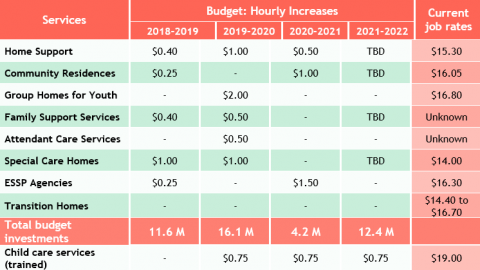 There is a media contact available on this news item: