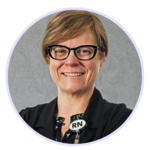 Cathy Wall has been a RN for 25 years, receiving her diploma of nursing  from the Saint John School of Nursing in 1993. She realized the importance of strong role models for her fellow co workers and her 2 daughters. She returned to school and received her Bachelor of Nursing in 2007. Cathy moved into Nurse Managing at the SJRH shortly thereafter. There she continues to mentor and lead nurses in the Ambulatory Care Program. Cathy spent much time volunteering with softball and cheerleading in Saint John while her girls were young. Cathy has always been a strong believer in Social Justice and once her daughters were teenagers she was able to become more active at a local level. Becoming more active in her local union she became the local president then became a board member of NBNU in 2014 as the Unit Rep for Nurse Managers and Supervisors. Cathy is now the 2nd VP on NBNU and continues to advocate for healthcare, Social Justice and the rights of all New Brunswickers.